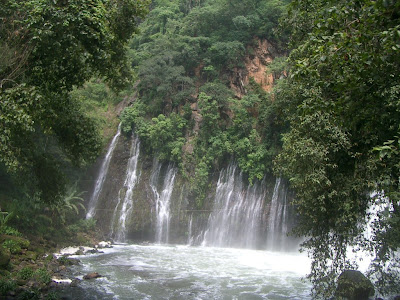 As spectacular as this is, the falls to the right is even more magnificent!

This area is wowsers! Fifteen of us followed Bruce's lead to Ejido Jucutacato lands, the center piece of which is the Tzararacua waterfall. Welcomed were several new faces, including two Morelians. Wayne and Susan C. made another trip from San Miguel de Allende. And Erin's mother and aunt visited from the States. 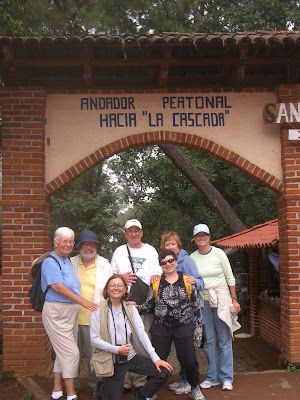 Some of the last to leave Tzararacua, just as a heavy rain cloud moved in.
Butterflies seen:
White morpho - Morpho polyphemus polyphemus
Magnificent swallowtail - Papillo garamas garamas
Tailed orange - Pyrisitia proterpia
Juno - Dione juno
Variable cattleheart - Parides erithalion
Birds seen/heard were (not in taxonomic order):
Great-tailed grackle
Inca dove
Acorn woodpecker
Rufous-capped brushfinch
Curved-billed thrasher
Mexican duck
Bridled titmouse
Canyon wren
American dipper - adult and juvenile
Black vulture
Turkey vulture
White-naped swifts - we had brief looks at three swifts as they zigzagged in or out of the miniscule cracks in the rock face. Only one of us saw the white nape.
As we were getting ready to head up the many steps to the parking lot, one of the horse tenders mentioned that there are other species seen early in the morning and late afternoon. The Patzcuaro Birding Club will return again to study them more.
Posted by Georgia Conti at 11:22 PM

Te felicito. Great to see all the PBC activity.