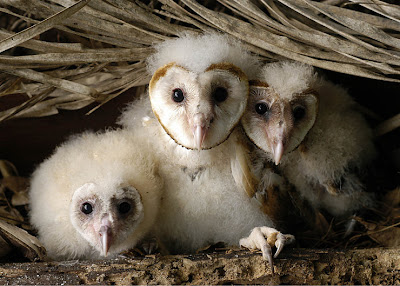 Photo by Nunes D'Acosta, Brazil. Check out his website at www.brasilaves.com.br
Thank you, Nunes, for permission to use your photo!
Here's the thing: I get to learn something about birds nearly everyday. This time my lesson was about barn owls.
I knew there were barn owls (Tyto alba) under the bridge to Jaracuaro, thanks to my good friends Wayne and Susan Colony, formerly of San Miguel de Allende, Mexico, and now living in the Tucson, Arizona, area. As many times as I have birded the bridge, the owls never made their presence known until Wayne and Susan mentioned the owls to me.
Last month, Bruce and I went to the bridge to check out the owls. It's not an easy access, for one must duck under a barbed wire fence, manage to traverse a steep rocky slope, and climb some stones to get under the bridge to where one might peer into the dark ledges of the underside of the bridge to where the owls might be. Of course, there's also the garbage one must step through to get to the vantage point and the very active bee hive one must avoid to reach the best spot to see the owls. I am wary of the hive, for I have been stung twice now.....the last time my arm swelled twice normal size and hurt for several days. 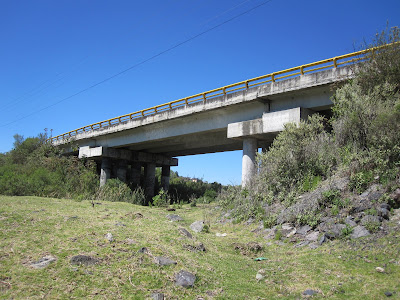 A climb up the right side offers a view into the left side where the second set of owlets are.

Along the way, we flushed two owls. No problema, I thought. We focused our binocs on the ledge and, lo and behold, spotted some owlets. We stayed a moment to count them - three babies no more than a day old. How cool can that be?!

We returned the next day to photograph them. Only this time, we flushed one adult and could not find the owlets. I was frantic, and Bruce was left holding a camera with nothing to shoot. I started to scan the area in case the family moved from one part of the bridge structure to another. Eventually, on the other side of the water channel, I spotted an adult. She didn't move, and I wasn't sure what she was doing. Was she hiding the owlets?

Puzzlement set in. Was she hiding the owlets? Had they been moved? If so, how could that be, given their sharp talons and beaks? Mostly I worried about the owlets we had seen - they were freshly hatched and so very vulnerable.

I emailed a couple of experts, and Jamie Acker from Bainbridge Island, Washington, suggested that I make sure there wasn't another nest under the bridge. Duh! It hadn't occurred to me. But sure enough, the next time I visited, I was able to count three adults.

Thus, I can admit to having learned some lessons about barn owls over the last couple of weeks: 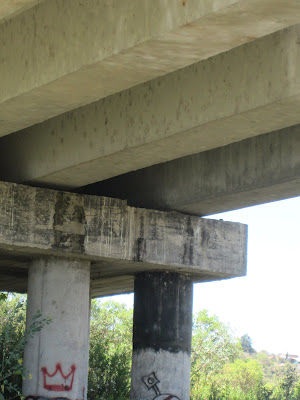 The new family is living in the dark area at the top of the columns.

Posted by Georgia Conti at 6:11 PM No comments: