Trogons in the Hills 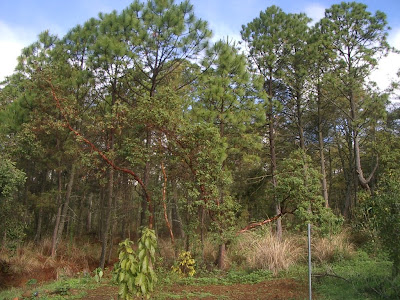 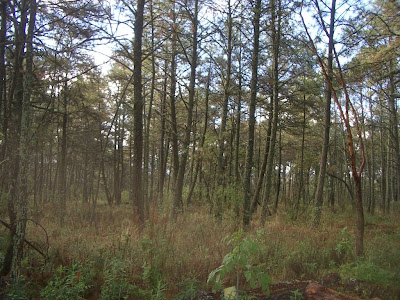 6:00 AM (July 3, 2008) comes early in Patzcuaro. It's dark and cold at this time of the morning. It's also eerie, with streets virtually empty except for a few sleepy-eyed individuals and an occasional combi (public transport).
I picked up Michelle, Erin, and Andrew at the traffic circle on Lazaro Cardenas and headed toward Erongaricuaro. We'd been invited onto private property up in the hills, and our purpose was to check it out for an upcoming bird trip. Well, that was one purpose. Secretly, I longed to see at least one, if not two, species of trogons.
As we arrived, the sky was just beginning to lighten. Thankful it wasn't raining - after all, it's that time of year. We were met on the patio by Brian, the owner of Rancho Madroño, and Maria, who is becoming quite knowledgable about the birds seen there - go Maria!
Greetings and introductions ensued. In the midst of this fun chatter, an unfamiliar noise finally registered in my head, and I asked "What's making that noise?" Always, the birder, I felt bad for interrupting the conversation, but, well, it was a bird.
We turned and, lo and behold, a trogon as sitting on a branch not 20 feet from us. It was making such a racket, and I was beside myself for not having my binoculars handy. I kept saying "Be still my heart, be still my heart." Or something along those lines.
By the time I got binocs in hand, the bird had flown. Was I watching where it went? No! Did I realize I wasn't fully awake and in serious birding mode? No! Someone had a brief glimpse of the bird but it moved further back into the forest never to be seen again that day.
Brian and Maria toured us around the property. Rancho Madroño is an organic farm that uses permaculture methods to restore and enhance habitat for native plants, birds and wildlife. The Rancho is off the grid with solar panels to provide minimal electricity and rain catchment systems provide the water. Other systems include composting toilets, solar hot water heating, plant propagation, adobe block making, food and test gardens, and many kilometers of trails ideal for bird watching.
Along the way, we saw the following birds (not in taxonomic order):
Common raven
Yellow-eyed junco
Pine flycatcher
American robin
Accipiters (a pair) - they must have been sharpies but we never got good looks. Brian says they're always around.
Orange-billed nightingale thrush
Black-headed grosbeak
White-throated thrush
Pine siskin
Violet-green swallows (nesting in tiles on shed. Oh so cute, but a cat likes to sit atop the tiles waiting for a snack....)
Acorn woodpecker
Mexican whip-poor-will (heard)
Hepatic tanager
Hummers - unidentified
Trogon - unidentified. I've listened to lots of recordings but none are of the alarm call. Unfortunately, I never saw the upper side of the tail nor did I have a chance to study the barring on the under side. As I've thought of this bird since then, I keep coming back to Mt. trogon but I cannot declare it. Brian found a dead trogon on his property - it's an Elegant trogon. I got to inspect it closely. I suspect both species are here...
Posted by Georgia Conti at 8:53 PM