A Tale of a Pied-billed Grebe 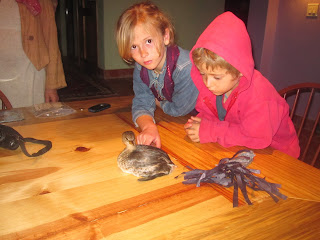 There I was on my sofa last night about to finish a good book when my dog Lucy started to bark and bark.

Up the steps came Javier, Andreja and their youngsters Gaia and Lenart.  They were distraught about a bird Javier had found while canoeing in a marshy area along the lake.  Caught in a fishing net, the bird was exhausted.  Javier managed to get it untangled and decided that I was the only person who might be able to care for it.  Yep, evidence that I have the reputation of being the local bird lady.
They thought it a duck.  These photos will show that it was a juvenile Pied-billed grebe. 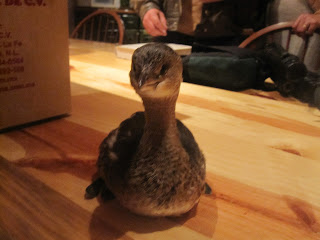 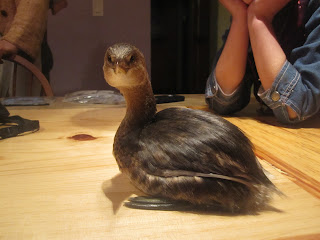 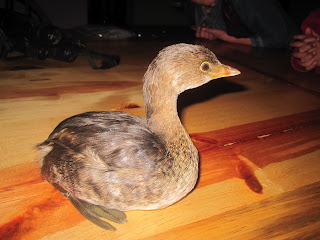 After examining the bird for injuries (none noted), the next question was what to do.  I didn't really know, because I've never been that close to a baby PB grebe and it was about 9:00 PM.  Dark was the night with only a sliver of moon.  Even so, I thought about taking it to the lake.  That's when I dialed Dr. Fernando Villasenor Gomez, ornithologist and dean of the biology department at the Universidad de Michoacana in Morelia.  Thankfully he answered the phone and advised me to keep it in the box for the night and release it in the lake in the morning.

The only other rescue I've done was a hummingbird that was banging itself against my window at 10 PM.  I kept it in a covered box with a sugar water feeder, and it flew off in the morning.  In this case, I wasn't too sure how the grebe would fare.
Well, in the morning, Lucy and I found the grebe alive.  It was sitting in a bowl of water I'd put inside the box.  It seemed to me to be seeking its normal habitat.  So off we went to the lake.

I took it out of the box and tried to delicately place it in the water.  Wowsers, with flapping wings and moving legs, it sunk in a flash and didn't surface, much to my concern.  I know they can dive and swim under water but I expected it to come up somewhere in sight.  The release was a let down.  A big part of me wanted colorful stars and balloons to explode above this marshy spot, an indication that all was well.  Not so.

I hope it swam to safety while washing off all evidence of humanoid touches. 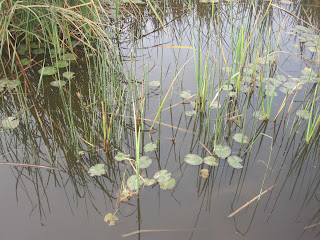 This is the spot where I released the grebe.
As the family left my house, Gaia who was celebrating her 8th birthday told me that the grebe was the best gift Mother Nature could have given her.  Feliz cumpleanos Gaia.
Posted by Georgia Conti at 7:29 PM

Gaia will remember the Grebe her whole life. Great photos.