On December 7, 2008, while coming to the end of a day hike with friends, I spotted a Common loon in basic plumage on Umecuaro's reservoir. (Seeing the bird made us a bit homesick, for three of us hail originally from Alaska and the Pacific Northwest where this species is, well, common.) 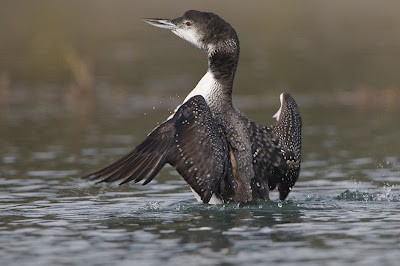 According to Howell and Webb, this species is not commonly found on Mexico's inland lakes.
I reported the sighting to Dr. Laura Villasenor Gomez and Dr. Fernando Villasenor, sister and brother ornithologists at the Morelia University, who were quite excited about the sighting. And, I also reported it to the American Bird Association, but it was not included in its publication of unusual sightings for Mexico.
Umecuaro is little known among the expat population in the Morelia-Patzcuaro area. It's a lovely area, one that is very popular on weekends when Mexican families spend the day picnicking. If you can find the kartadromo sign on the highway between Morelia and Patzcuaro, Umecuaro is a couple villages south. Follow the signs for the ashram and you cannot miss the reservoir.
Trails follow alongside a cascading stream

Other trails wind through pine-oak forests

The grounds of the ashram are well maintained and secluded

Posted by Georgia Conti at 2:08 PM