Under the roof of my patio heater.  This is the second time they've used the heater as a nesting site.  I didn't realize they'd nested there until I bought a new gas tank and was going to test the recently repaired starter.  Out came one of the parents.  Surprise! 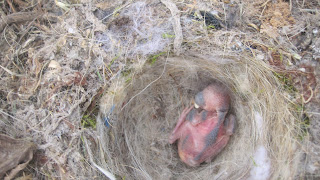 I climbed the ladder, and, lo and behold, I found three freshly, and I mean freshly, hatched chicks.  That was on May 19. 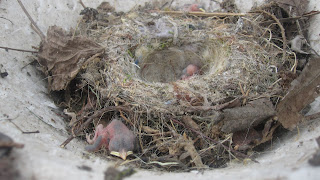 I photographed the nest again a week later on May 27.  Only two chicks were in the nest.  One was much smaller than the other. 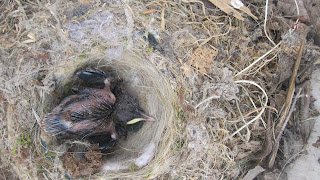 My last photograph was yesterday June 3.  Only one chick remained and it was ready to fledge.  In fact, it jumped from the heater onto my grassy yard, I had a dickens of a time getting it to stay in the nest area.  Finally I put it in a plastic jar without lid so it couldn't so easily escape, and I could return it to the nest so its parents could continue to feed it.
Today, one day later, it's gone.  I hear them chittering in my yard so I know they're around. 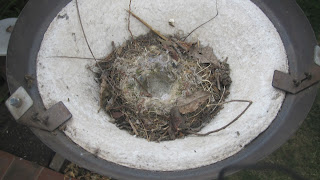 Next on my to-do list is to buy some chicken wire to enclose the top of the heater.  There's got to be a better place for them to nest.
Posted by Georgia Conti at 8:40 PM