A water feature is a sure bet to attract birds.  I finally have a water feature or, as it is called here, a small cascada.  Hooray!

The rainy season ended in October, and the countryside is turning brown.  Nows the time for my water feature to bring in the birds.  And it sure is.

I looked out my kitchen window yesterday around 11 a.m. and spotted the following species splashing about:

I also heard the following in nearby trees and shrubs:

All are commonly seen this time of year.  I'm not sad that there wasn't a rarity in the bunch, because I know one day I'll look out and will spot something unusual.  I just know it. 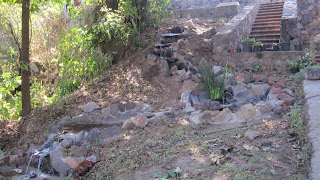 As you can see, I need to surround the cascada with appropriate plants.  But that means I must dig up the dirt, screen out the rocks, and amend the dirt with oak-leaf compost.  Not an easy job but one I'll tackle before rainy season starts in May. 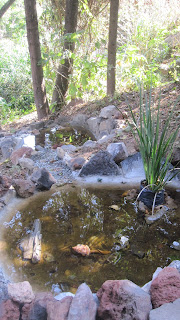 Oh, I almost forgot to mention this little nocturnal creature.  It's called a tlacuache in Mexico; an oppossum of yet to be determined species.  S/he likes having water handy as well. 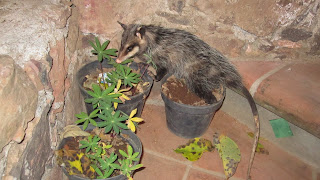 It looks great, Georgia. We find that birds come to water more than anything else in Patzcuaro (outside of the rainy season, of course). Abrazos.

Hey! That aqua looks great. The birds are going to be coming your way with this new water feature. Way to go Georgia. You continue to have one of the fine places with your blog. Helpful for many of us who are not able to live there in highland Mexico.