I hadn't really thought about bats since we moved from Seattle. There we installed a bat house on our home. We have also installed one here in Arocutin, and it is being used as evidenced by the bat poop beneath. 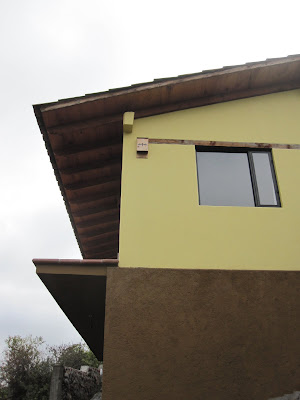 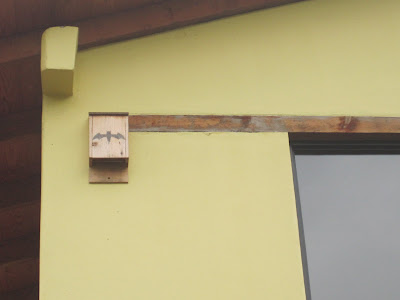 While birding recently, Hugo and I stopped at one of our favorite spots - the Santa Juana road. At this location, we've often been thrilled by Mountain trogons, Red warblers, Hairy woodpeckers, Mexican jays, and Gray-barred wrens. This time we were met by destruction: numerous trees had been removed, probably by illegal timber harvesters. This assessment according to our local forestry advocate, Jose Luis.
Among the debris, we spotted a lonely bat hanging on the remains of a small branch - a Hoary bat. Lasiurus cinerus. In Spanish, it is known as Murcielago nevado.

Murcielago. Murcielago. For me a difficult word to pronounce. Nonetheless, it is a good word to know, and it is good to know about these creatures.
According to a poster I saw recently at the Rosenthal's furniture facture (http://www.mfa.eronga.com/), the following bats are found in Mexico, in addition to the Hoary bat:
Lasiurus cinerus - Lesser long-nosed bat:

Fascinating info about bats. I am so sorry to learn about the continuing environmental destruction going on in Mexico. It is particularly bad in the Central Highlands of Mexico. At least people are becoming more aware of environmental issues.

G - Glen is a Bat Man and has built bat houses. Fascinating creatures, representing ca. 25% of the world's species of mammals.